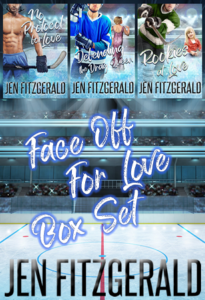 Join Semka, Elijah, and Ryan as they face off against the forces that have kept them from finding love.

No Protocol For Love

Semka is a Russian National who stands to lose his family as well as his country if he chooses to come out.

Tyson lives his life out and proud and refuses to go back in the closet for anyone, not even for the one and only guy he’s fallen head-over-skates for.

Elijah’s diabetes, more than his time-intensive hockey career, has kept love at a hockey-stick’s length.

Accountant by day, drag queen by night, Mark is no one’s ideal man. His hyper-masculine, homophobic brothers have drilled that into his head over the years. How on earth is a professional athlete, masculinity personified, even gay? And why would he want to date a wierdo like Mark?

It takes his wife leaving him and the subsequent kindness and generosity of a virtual stranger for Ryan to realize he’s gay.

Nicholas has been nothing if not focused on his education. For years. And to the exclusion of all else. Becoming the primary caregiver for a three-year-old as well as housemate to her hot hockey father forces him re-think his life’s plan.

Books in This Volume